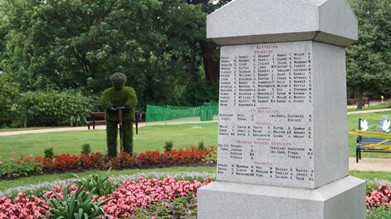 Four poignant memorials have been installed in parks and green spaces across Chelmsford’s centre as part of the city’s First World War commemorations.

With rifle lowered, a foliage sculpture (3D InstaPlant) of a Commonwealth soldier now stands amongst the flowerbeds next to the War Memorial in Central Park. Surrounded by red begonias with silver edging, the statue is covered in green carpet bedding, representing a soldier standing Last Post in a Flanders Fields of poppies.

Around the monument, three new decorative benches now provide a contemplative place to sit. Instead of the usual simple rails, their steel backs are cut out and coloured in a display of poppies, doves and the message ‘Lest we forget’.

Already drawing attention from passers-by, these striking tributes were installed by Chelmsford City Council to pay respect to all who fought in the First World War and other conflicts.

Flowerbeds elsewhere in the city are also taking part with new floral designs. An immense red poppy is picked out in begonias on the Odeon Roundabout, with a silver background of cineraria maritima and a black board forming the centre. In the Pleasure Gardens at Hylands Estate, carpet bedding plants have been used to create the lettering ‘1914-1918’ and ‘WWI Centenary’ alongside the shapes of red poppies.

Councillor Bob Massey, Cabinet Member for Parks, said, “2018 is the final year of First World War Centenary commemorations, which are taking place across the globe. In one way or another, the war touched the lives of almost everyone in the countries that took part and resulted in the deaths of more than nine million soldiers. With these installations, Chelmsford remembers their sacrifice.”

All the living memorials, including the ‘Tommy’ in Central Park, are expected to last through Remembrance until the first frosts in late November. The seating is fixed and will be left in place as a permanent tribute.”